Bit Time – How does tech affect the way we talk?

How does tech affect the way we talk? We explored communication technology through digital creativity with schools and community groups across Basildon.

Bit Time​ is an intergenerational project exploring how different generations engage with the tools we use to keep in touch. Throughout 2019 we worked with a variety of schools and community groups to considering the question ‘how does technology affect the way we talk?’, culminating in an exciting interactive exhibition which toured the town in the summer of 2019.  This project was made possible with support from:

Creative Coding in the Community

With the project lead by Signals’ Education Coordinator Frazer Merrick and the project’s lead artist is Laura Trevail, together they’ve devised and delivered a workshop where participants could get creative with digital technology and learn some new digital skills. All whilst gathering and generated stories, memories and artwork relating to past, present and even future ways we communicate with technology. Importantly the workshop positioned creativity as important as technology, and that as artists we are perfectly positioned to design the tools of the future.

One reoccurring theme with younger participants was how when asked about the future of communication they correlate this with transportation. When given the time to build prototype ‘future communication’ devices ideas often included driverless cars, personal flying vehicles and even teleportation portals. This confirms the close ties we often forget between communication and transportation, and how advancements in technology facilitate improvements in both; making longer distance travel more affordable and facilitating real-time communication all around the globe. This was confirmed when we looked at the data collected in our questionnaire in response to question “whats the longest you’ve waited for a reply”, with young people replying with figures in hours/days/weeks and older people replying with figures in months/years/decades.

However, as we become ‘always contactable’ this brings both positive and negative outcomes, with different generations setting different expectations as to how long they can wait before they reply with FOMO (the fear of missing out) causing some unhealthy practices in both young and older people. Theres certainly more work to be done in understanding the wellbeing around our digital lives.

The next step of the Bit Time project was to take these reoccurring themes and ideas and develop them into an interactive exhibition. Working with four digital artists; Emily Godden, Dave Norton, Henry Driver and Sophie Gresswell we built two phone box sized structures/totems with interactive experiences – all based on the ideas captured during our earlier workshops. Emily Godden’s ‘Pidgin’ allowed you to create new mash-up inventions from randomised data collected from our workshop questionnaires. Henry Driver explored how images add context with his ‘Emotions Messenger’, building upon a idea about sending actual emotions. Sophie Gresswell’s ‘Communication Conductor’ tackled the glitchy nature of some cutting edge technology by recreating a broken video call through interactive objects. Dave Norton continued the questionnaire process itself by installing two phones, one to leave a response and a second where you can hear others – which ring as you walk past.

Throughout the week welcome people from across Basildon to join in with the building process, which all took place in the excellent Creator Space at Basildon Library – with students from Billericay School, Ryedene Primary and various home educated families joining us to work with the artists and construct the tower. Angie Blackwell from Basildon Library said “We were thrilled to see it being used by the wide range of different groups who were collaborating with Signals, and it brought a real energy to the Library atmosphere!”

It was during this week we also met the Together Basildon team from Basildon Council who kindly covered our project in their community newspaper which you can read here. And we also welcomed back young radio presenter Callum Veer who interviewed the artists for his show on Gateway Radio, which you can hear here.

Artist Henry Driver commented that “Through the project I learnt a number of technical skills exploring playful and immediate user interaction for digital artworks. [This] project really helped broaden my ability to collaborate and create, and I feel I am a much better artist as a result.” 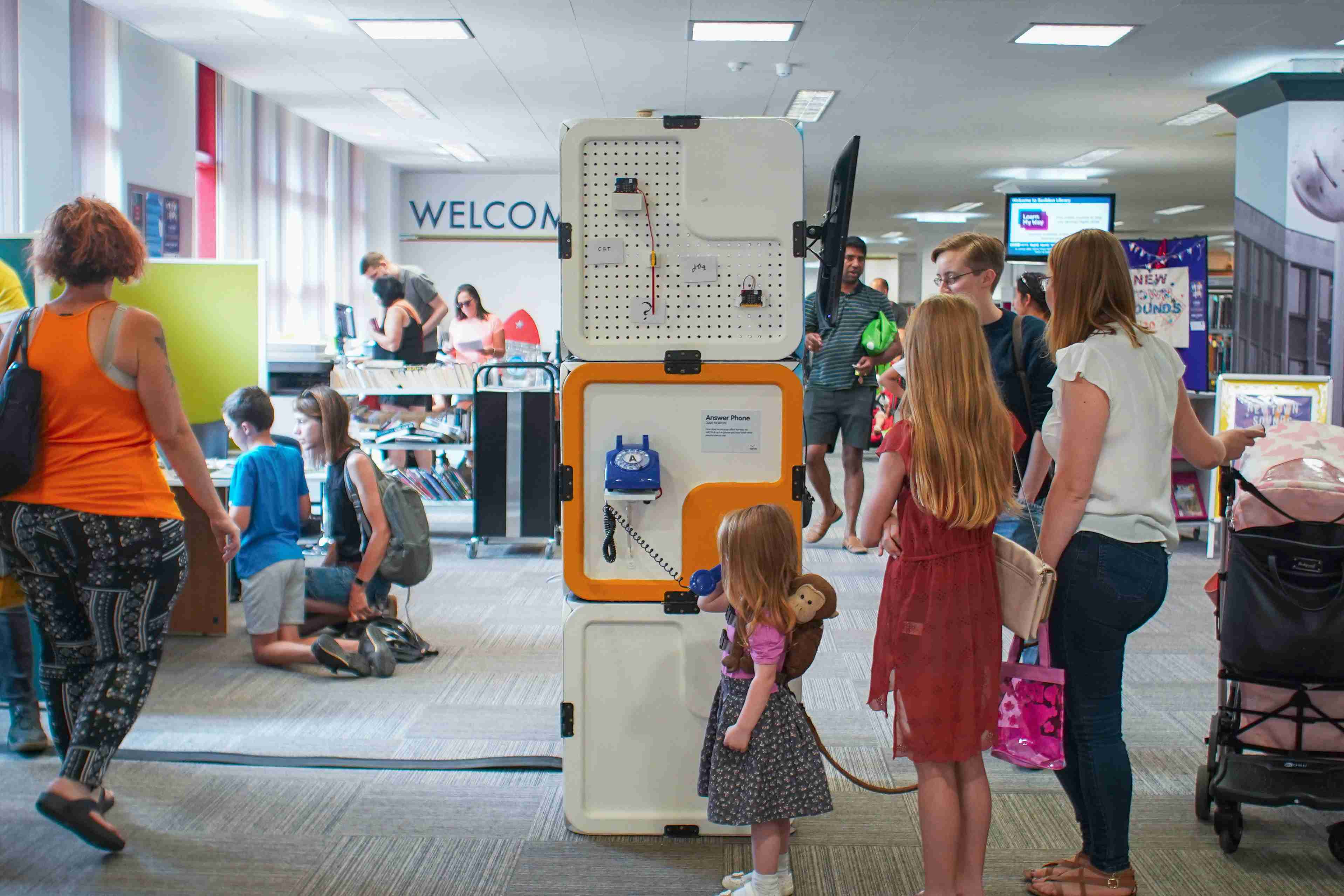 Following an intense week of construction at the Basildon Library Creator Space, we took the Bit Time Towers back to the Billericay School for their first test run. Putting the exhibition in the hands of the people whose ideas were the inception of the structure. Project lead and signals education coordinator Frazer Merrick said:

“It was really exciting to take the Bit Time artwork out on tour for its first trial exhibition. As with all digital projects, theres bound to be bugs, so returning back to Billericay School where some of the initial ideas came from made total sense. The feedback from the ‘gifted and talented’  art and technology students was excellent, and it was brilliant to see the structures and the artwork interacted with in new ways we hadn’t thought of.”

After taking the time to make improvements suggested by the Billericay school students, the towers went back out on tour to Basildon Street Science STEM Festival, the New Town Sounds Festival and Basildon 70 Schools Exhibition. It was fantastic to bring the interactive artwork out into the public and get people playing with technology. Dave Norton rotary telephones spurred conversations with all ages, with older people reminiscing of days spent dialling and speaking to the operator – whereas younger people just enjoyed playing with the rotary dial itself! Check out some of the recordings the left in response to our questionnaire phone.

Lead artist Laura Trevail also utilised some blank pegboard panels to bring our workshop activity along with us to the exhibition, 3D printing Microbit mounts so we could install our servo motors onto the structure and introduce the public to the wonderful Microbit computers – this leading to multiple on-the-spot loans of Microbit’s from Basildon Library. Fun fact, all Essex Libraries have Microbit computers in stock for you to take out like a book – find out more here.

Bit Time changed perceptions of what can be achieved through digital arts community projects; increasing the cultural capital of Basildon, increasing engagement in STEM topics and developing digital artists too. With news that Basildon has since been awarded a whopping £1,289,002 from Arts Council England as part of Creative People and Places 2019-2023 it is an exciting time for art and creativity in the town.